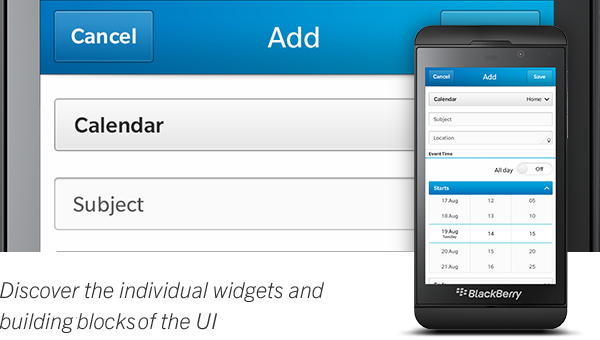 Use a picker when you want users to choose from two to three sets of interconnected values, such as the day, month, and year of an appointment, or the hour and minute for a timer. You can also use a picker to simplify a complex UI and reduce the number of steps in a workflow by allowing users to select multiple values in one step.

Users need to select from only one set of values. Use a drop-down list instead. 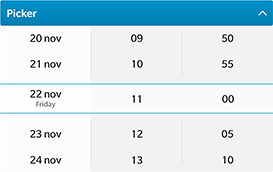 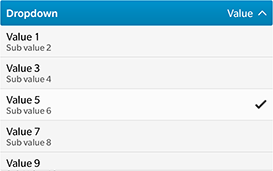 Use a drop-down list when you want users to choose a single value from a larger set. Drop-down lists can make complex screens more compact and streamlined by collapsing many options into one element.

Users need to choose from two to three sets of interconnected values, such as the date and time of an appointment. Use a picker instead.

Use the value users are most likely to choose as the default value.

Don't use "Yes" and "No" as list values. Use a check box instead, and rephrase the option to describe the action.

A list presents content as list items, usually as an entry point to the next step in the navigation hierarchy. Lists can be displayed in a stacked or grid layout. To read more about lists, see Screen views.

If you use images, populate the list as soon as possible so that list item text appears before all images are loaded.

Use dividers and headers to create a visual hierarchy to separate groups of items that belong together.

Best practices for dividers and headers

Use a divider as a simple visual barrier, to separate items in a container or list.

Use a header to separate sections in a list. A header contains one or two strings to label the section.

Use a button to initiate an action.

Set the button that users are more likely to tap as the default button. Don't make a button for a destructive action the default.

Use single-word labels where possible.

Use verbs that describe the associated action, such as "Cancel," "Delete," or "Save."

Use a text field to let users input a single line of text, such as a contact name or a password.

Use a text area to let users input several lines of text, such as a comment or a message.

Learn more about text input in Keyboards and Forms.

Include hint text in fields so that you need fewer labels. You might need a label if the field has a default value or if the field's description is too long as hint text.

Try to reduce the text users need to type. Let users choose items from pickers when you can. Try to store and display information that users enter so they don't have to type it repeatedly.

Use word prediction in text fields only with text that is likely in the dictionary, not in password, phone number, or name fields. The predictions might get in the way in these fields.

Use an activity and progress indicators to show users that your app is working and to show them the process and its progress.

Use an activity indicator when you want to show that your app is working, but you can't determine how long the process will take.

Use a progress indicator when you can determine how long the process will take.

Always indicate progress when a process takes more than 3 seconds to complete.

Incorporate an inline solution if you can.

Use check boxes when users can select multiple items or options.

Use radio buttons when users can choose among more than two mutually exclusive options.

Create a touch target area for the whole row and label. Check boxes and radio buttons have small visible areas.

Use positive labels where possible. For example, use Show instead of Hide.

Use terms that identify the state of the option, not the action required to change the state. For example, "On" indicates the current state, but "Turn on" describes an action.

Use a slider to control settings with a wide range or to show a preview of the change (for settings like volume level or screen brightness). You can also use a slider for fast forwarding and rewinding media files.

Users drag the slider from left to right, or double-tap it to jump to predefined increments.

Combine sliders with images or strings that explain the context, such as progress of a media file or the level of a filter that is being applied to a photo.